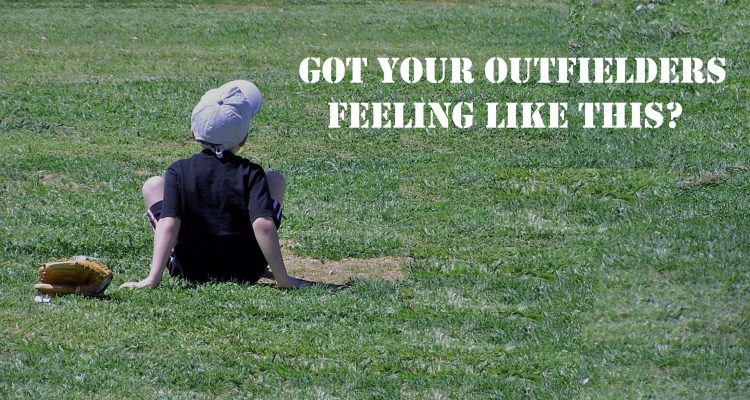 Outfield doesn’t have to be boring! Use these fun youth baseball outfield drills regularly at practice and your players will be tracking down tough fly balls in no time.

Player will start facing the coach, in an athletic, ready position about 10 feet away. On coach’s cue, player will drop step to a predetermined side. Coach will then throw a ball to the side that the player opened simulating a fly ball over their shoulder. Teach players to be precise with their first step and get their hips opened immediately to the direction they want to go. Switch drop step sides.

This will be set up the same as the regular drop step drill. However, the coach will throw the ball to the opposite side of which the player has opened. So if we are opening with our right foot, the coach will throw it to the players left side. The player will be forced to either turn his head and hips around, or plant and open up to the opposite side. Teach them that on a ball that is hit hard over our heads, it is quickest to just turn our heads and hips and keep running. If a ball is in front of us or directly to the side of us, then it is easiest to just open up our hips to go get it. Work both drop step sides.

Player will begin lying on ground facing away from coach. Coach will throw a pop up and say “ball” at the same time he is releasing the ball. Player will hop up quickly, locate the baseball and make the catch. Coaching point: Make sure players locate the ball before determining a direction to go. Young players tend to get antsy and guess where the ball is going to be. Tell them to remain calm and freeze in their current location until the ball is located.

Young players will need lots of practice to gain confidence fielding an outfield, “do-or-die” ground ball the correct way. A “do-or-die” ground ball is one in which the outfielder needs to make an immediate throw to try to throw a baserunner out. Players can begin with their throwing hand side knee on the ground. They will begin with the ball in their glove, then pop up into a crow hop or shuffle step and make the throw. They will then progress to standing with their glove foot in front and the ball in their glove. Again, they will work immediately into a crow hop or shuffle step and make the throw. Finally, a coach will roll ground balls to the outfielders. Make sure they are fielding the ball with one hand in front or on the side of their glove foot. Do not allow them to use two hands or field in the middle of their body. Teach them to get choppy feet as they approach the ball, then to accelerate through the ball as they field. Do not allow them to completely stop moving at any point while fielding.

You will be using tennis balls, stuffed, foam, or nerf balls for this drill. Players will also be wearing their batting helmet for added protection. The coach will be throwing (or hitting if players get good at drill) fly balls to the fielder. The fielder will anticipate and move his feet to get underneath where the ball will land, having it bounce off the top of his head. Variation: Make this even more fun for the players, by having them partner up and the person who is not taking the ball off the head tries to catch the ball with his glove after his partner head butts it. This can be a competition as well.

Get Behind it Fly Ball Footwork

Player will start 15 to 20 feet away and facing coach. Coach will throw a pop fly that will land roughly at or just behind the player’s starting point. Player will work on getting behind the baseball and working through it as he catches it. Teach players to catch the ball up high every time. As players get the foot work down, back them up and add in a throw back to the coach.

WE’D LIKE TO HEAR FROM YOU. WHAT ARE YOUR FAVORITE OUTFIELD DRILLS?
PLEASE SHARE IN THE COMMENTS!