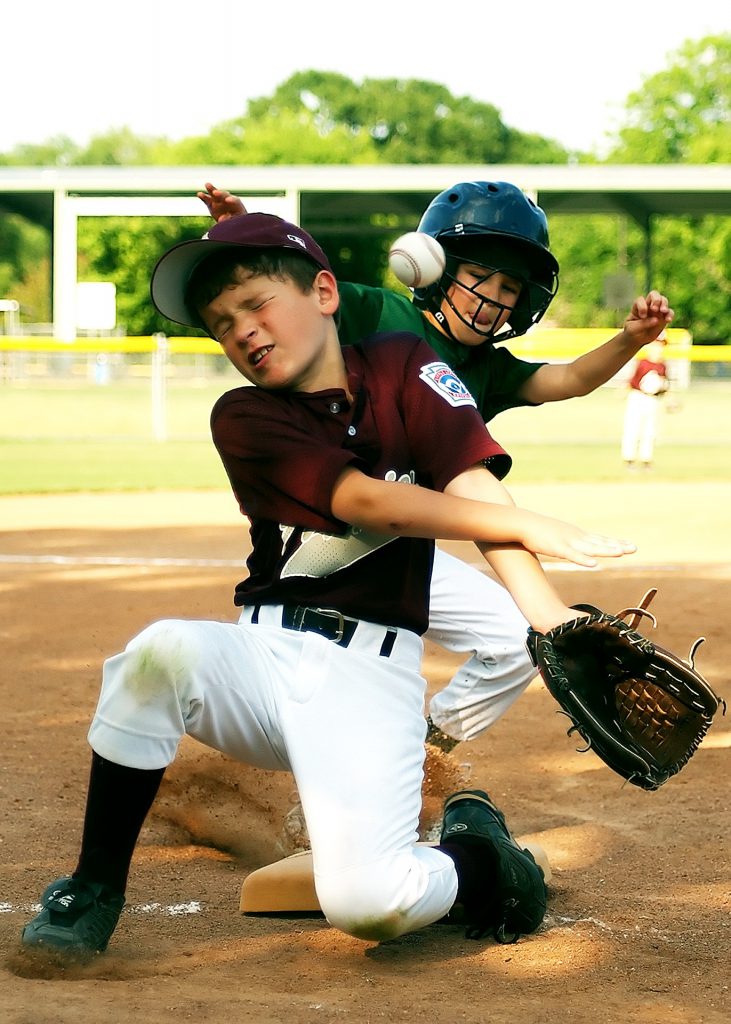 The fear of getting hit by the baseball is one of the most difficult things to overcome for many beginners. It can be evident when they are hitting, fielding a ground ball or fly ball, or even just playing catch.

In each case, using softer balls, like a safety ball or tennis ball is the first step in helping the player overcome the fear.

You will see many beginners and young players who move their body away from the ball as it comes to them when playing catch. Obviously this is not ideal, and it can make it very difficult catch the ball.

If you are a parent or friend helping someone learn how to get over the fear of the ball, understand that throwing a regular baseball at them harder is only going to exacerbate the problem. Every coach or parent that works on playing catch with a beginner should invest in a set of safety balls. They are the same size as a regulation baseball, similar weight and feel, but are much softer. Start by throwing the safety ball softly, and increase the speed as the player’s confidence and skills improve.

Much of the fear when catching the ball comes down to a lack of confidence in glove skills. Increase the time you spend working individually with these players on developing their glove skills.

For more tips and drills for developing glove skills, check out our post on teaching kids how to catch the ball.

I see it all the time when working with young hitters, they’ll look great on the tee or in soft toss, then it all changes when you start throwing to them. For some it will be obvious. You’ll see their stride foot “step in the bucket” (moves away from the plate) as soon as the pitch is thrown. Or you’ll see them flinch when pitches are thrown near the inside part of the plate. For others it is more subtle. They look great on the tee and soft toss, but when being thrown to they have a slight hesitation or reluctance to take a good, full and hard swing, especially on inside pitches.

I love to use tennis balls to help players get over the fear. They’re durable, and will hold up to being hit much better than safety balls.

With tennis balls, begin to teach players the correct way to get hit by a pitch. They must learn to turn their body in toward the catcher, which exposes only their backside to the ball. As a result, sensitive areas that are primarily bone, like the elbow and rib cage are no longer exposed.

Start by throwing each tennis ball (nice and easy!) at the player, having them turn in correctly to expose only their backside to the ball. Make sure they are learning to drop the bat as they turn in! If they leave the bat up the ball may bounce off it, resulting in a foul or even a fair ball.

As the player progresses, begin to mix it up. Have them begin to swing and hit the tennis balls that are thrown over the plate. Every few pitches throw a ball that will hit them.

The end goal with this drill is for the player to gain enough confidence that they don’t turn in, step out, or flinch on balls that are inside but not close enough to hit them. I tell my guys that they should be confident enough to take a pitch that is only a couple inches from hitting them without flinching.

When Fielding a Ground Ball

You’ll often see young players side step or pull their head up when they are fielding a ground ball. Again, a lack of confidence in their skills is usually the cause for this.

The first thing they must work on is gaining confidence in getting in front of the ball. Here are a couple drills that can help with this.

Through the Wickets Drill

Purpose: This drill is to help young players begin to understand the importance of being quick on their feet, moving to go get ground balls, and getting their body in front of the ball.

Set up: Coach will have a bucket of baseballs and be about 25 feet away from player. Drill can be done inside or outside. If outside, it will work better on infield dirt than it will on grass. Player will be in an athletic stance facing the coach. Player does not need a glove.

How it works: The coach will begin rolling ground balls by hand at a medium speed. He will alternate rolling the balls to the players left and right, forcing the player to move several steps to get to the ball. The player’s goal is to move his body into position so that each ball rolls between his feet and through his legs. The speed should be fast enough to force the player to move quickly, but not too fast for the player to get to. Each ball should roll past the player and out of his way. The coach should not bounce the ball, it must be rolling the entire time. The coach will roll 4-6 ground balls in a row, then give the player a break or rotate to the next player.

Purpose: This drill is to get players comfortable and confident in getting in front and keeping their body squared up to the ball.

Set up: This drill is designed for use with TENNIS BALLS. It must be performed on a surface that allows the ball to bounce. Player will set up about 15 feet away from coach, facing him in a ready position. Player does not need a glove.

Next, the player must develop confidence in his hands so that he can stay down on the ground ball instead of pulling his body or head up. Here are a couple drills to work on that.

Purpose: This drill is to help players learn the proper ground ball fielding position and to work on their hand skills when fielding a ground ball.

Set up: This can be a partner drill or a coach led drill. Partners or player and coach will set up about 10 feet away from each other. Players will be set up in a ground ball fielding position. This can be done with a glove, or it can be a bare handed drill.

How it works: Players and/or coaches will roll ground balls back and forth to each other, while remaining in the fielding position. Players should focus on fielding the ground ball with their hands in the “alligator mouth” position (throwing hand over the top of the glove hand). With their hands together, players will field, bring the ball in toward their body and directly up to their chest. They should be getting the ball up to the position near their chest that they typically throw from. Remaining in the ground ball position, they will immediately roll a ground ball back to their partner or coach. As players get better at this drill, speed it up. Players can try to get the ball into their chest and back to their partner as fast as possible. Coaches working with a player can roll balls in a rapid fire procession, having the player bring each ball to his chest, dump it off to the side, and immediately receive another ground ball.

Purpose: This drill is to improve players infield glove skills.

Set up: Fielder will begin on his knees, with glove out in front of his body but without stiffening out his arms. His fingers should be pointing to ground, glove tip touching ground. Partner or coach will be on knees about 10 feet away.

How it works: The coach or partner will toss the ball softly so that it hops directly in front of the fielder’s glove creating a short hop. Fielder will push his glove through the ball while extending his arm and trying to keep his fingers pointed to the ground as long as possible. While doing so, the player’s eyes and head should stay on the baseball and glove. The player should try to avoid flipping their glove up and curling their wrist. Ideally, their palm will finish facing the sky.

*If your players are having trouble throwing or catching short hops during this drill, you can make it easier by having them use their throwing hand to drop their own short hops right in front of their glove. Another option is having their partner stand close and drop the ball directly in front of them.

When Catching a Fly Ball

When catching a fly ball, many young players will move out of the way and try to catch it on the side of their body. The idea of staying under a hard ball that is falling out of the sky can be troubling for someone who is just starting out in the game of baseball. Work on the following drills with players who have difficulty getting and staying under a fly ball.

Purpose: This is a simple drill to help kids learn how to catch fly balls. It helps them gain confidence catching the ball up high and in front of their body.

Set up: Use a SAFETY BALL for this drill. This can be a partner or coach led drill. Partners or coach and player will start about 15 feet apart facing each other. Players will need their gloves.

How it works: Coach or partner will flip a ball underhand into the air so that it will land close to the player. They should start out by flipping it about 8 to 10 feet in the air, and work up higher as the player begins to gain confidence. Player is trying to get and keep their body underneath the ball and catch the ball up high near their head. The player should freeze after they catch the ball, leaving their glove up where the made the catch for 2 seconds.

This is a drill your players will really enjoy! Visit our fun youth outfield drill post here to check it out.

Have you worked with players who were afraid of the ball? What were some of the things that worked for you? We want to know. Share with us in the comments!